You are here: Home / Our Blog / Legal Awareness / Environmental Laws

Laws existing in India to prevent and control water pollution 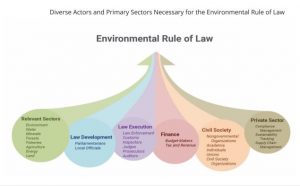 Environmental Laws in India and Gujarat

The need for protection and conservation of environment and sustainable use of natural resources is reflected in the constitutional framework of India and also in the international commitments of India.

The Constitution under Part IVA (Art 51A-Fundamental Duties) casts a duty on every citizen of India to protect and improve the natural environment including forests, lakes, rivers and wildlife, and to have compassion for living creatures.

Further, the Constitution of India under Part IV (Art 48A-Directive Principles of State Policies) stipulates that the State shall endeavor to protect and improve the environment and to safeguard the forests and wildlife of the country.

Some of the important legislation for environment protection are as follows:

The National Green Tribunal Act, 2010 (No. 19 of 2010) (NGT Act) has been enacted with the objectives to provide for establishment of a National Green Tribunal (NGT) for the effective and expeditious disposal of cases relating to environment protection and conservation of forests and other natural resources including enforcement of any legal right relating to environment and giving relief and compensation for damages to persons and property and for matters connected therewith or incidental thereto.

The Water Prevention and Control of Pollution Cess Act, 2003

Industrial waste is one of the causes of the of water pollution. Often the waste from the industries is being disposed of into the rivers which pollute the river to a significant extent. According to Section 2 of this Act, industries include any operation or process or sewage or disposal treatment or any industrial effluent. Section 3 of this Act provides an exemption to industries from levying cess on those industries, which consume water below the specified limit. Water gets polluted through the toxic or non-biodegradable substances when the processing of these materials is being done in any industry, and such industries are required to pay cess under this law.

Relevance of Section 24 of this Act

To promote the proper implementation of the Act, Section 24 of the Act imposes a duty upon a person to refrain from allowing any poisonous or noxious matter, as determined by the standards laid down by the Central Pollution Control Board, into any stream or sewer or on the land. Another duty imposed by this Act upon the person is that no person shall, knowingly enter into any stream in a manner so as to impede the flow of water or in any other way causes pollution of water. According to this Section, any person who violates or contravenes with the provision of this Section shall be made liable to be punished with imprisonment of one year and six months which may extend up to six years.

Drawbacks of this Act

The Indian Penal Code and Pollution

The Public Liability Insurance Act, 1991 was enacted with the objectives to provide for damages to victims of an accident which occurs as a result of handling any hazardous substance. The Act applies to all owners associated with the production or handling of any hazardous chemicals.)

The Ministry of Environment and Forests had issued the Coastal Regulation Zone Notification vide Notification no. S O. 19(E), dated January 06, 2011 with an objective to ensure livelihood security to the fishing communities and other local communities living in the coastal areas, to conserve and protect coastal stretches and to promote development in a sustainable manner based on scientific principles, taking into account the dangers of natural hazards in the coastal areas and sea level rise due to global warming.

Hazardous waste means any waste which, by reason of any of its physical, chemical, reactive, toxic, flammable, explosive or corrosive characteristics, causes danger or is likely to cause danger to health or environment, whether alone or when in contact with other wastes or substances.

There are several legislations that directly or indirectly deal with hazardous waste management. The relevant legislation are the Factories Act, 1948, the Public Liability Insurance Act, 1991, the National Environment Tribunal Act, 1995 and rules and notifications under the Environmental Act. Some of the rules dealing with hazardous waste management are discussed below: