Quashing of FIR/Criminal Proceedings Under Section 482 of CrPC

A brief write up on FIR quashing for understanding the concept and the powers of the court for FIR quashing. The accused or the suspected persons have the right to seek the FIR quashing on legal grounds and to show that the contents are contradictory and the FIR would never lead to a conviction of the accused person. This is a very important work as it leads to the FIR quashing, so it has to be done very carefully through a highly qualified and trained advocate. The grounds for FIR quashing needs to be determined very clearly and established before the court.

FIR quashing can be filed by the accused persons based on the merits of his case but one should bear in mind that prima facie they have to show a case in their favor on the basis of the charge sheet. If the charge sheet as filed by the police is in contradiction of any law, then also quashing of FIR can be done. 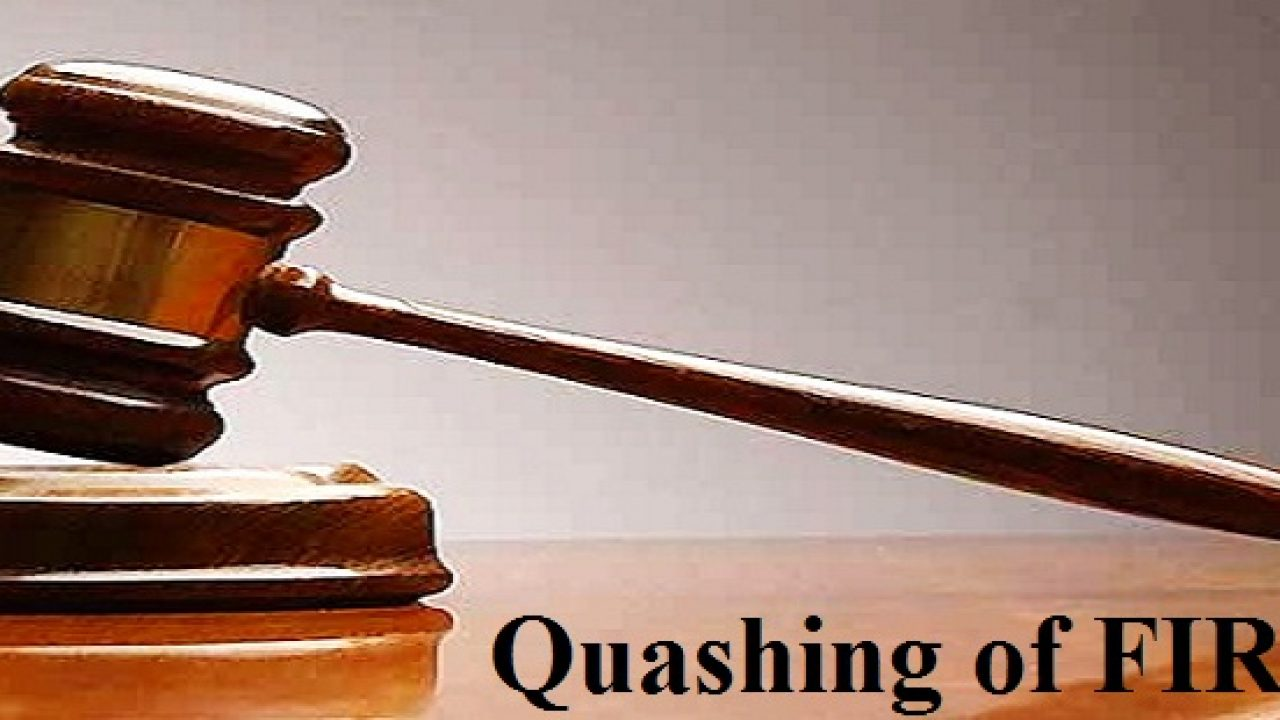 FIR quashing can be done by filing a petition under Section 482 of CrPC. The said provisions related to FIR quashing read as under:

“Saving of inherent powers of High Court Nothing in this Code shall be deemed to limit or affect the inherent powers of the High Court to make such orders as may be necessary to give effect to any order under this Code, or to prevent abuse of the process of any Court or otherwise to secure the ends of justice.”

First Information Report is commonly known as FIR which is defined under Section 2 (d) of the Code of Criminal Procedure and reads as under:

(d) “complaint” means any allegation made orally or in writing to a Magistrate, with a view to his taking action under this Code, that some person, whether known or unknown, has committed an offense, but does not include a police report. Explanation.- A report made by a police officer in a case which discloses, after investigation, the commission of a non- cognizable offense shall be deemed to be a complaint; and the police officer by whom such report is made shall be deemed to be the complainant;”

By its meaning, FIR is only a report to the police by anyone which the police is under obligation to investigate and determine the allegations and submit a charge sheet before the court or a closure report. The police may find the allegations of the FIR to be not proved or incorrect and file a final report or closure report before the court therein stating that the FIR needs to be closed.

Section 482 of CrPC, which deals with the power of court to quash criminal proceedings, hasn’t given the details of what exactly constitutes the inherent power of court. In that sense, the Code is very vague as it doesn’t lay out the grounds on which the foundations of the inherent power of court lay. Furthermore, there has been consistent inconsistency in the judgments of the Supreme Court of India with regard to the application of Section 482 of CrPC. Consequently, the application of section 482 of CrPC is a very agitated issue in litigation along with being a strongly debated concept in the legal academic circles.

Rules governing the petitions which pray for quashing of criminal proceedings

In another important case Prashant Bharti v. State of NCT of Delhi (2013) 9 SCC 293, Supreme Court has enumerated the following important points for consideration of the court for FIR quashing under Section 482 of the CrPC:

The Court has finally held that if the answer to all these questions is in affirmative, then the FIR quashing could be done by the High Court.

In another important case, Parbatbhai Ahir v. the State of Gujarat (4 Oct 2017), the Supreme Court dealt in a comprehensive manner, the various important issues related to the FIR quashing which are listed as under:

Heinous and serious offences involving mental depravity or offences such as murder, rape, and dacoity cannot appropriately be quashed though the victim or the family of the victim have settled the dispute. Such offences are, truly speaking, not private in nature but have a serious impact on society. The decision to continue with the trial in such cases is founded on the overriding element of public interest in punishing persons for serious offenses.

If we summarize the legal provisions, we find that FIR quashing depends upon the facts and circumstances of each case and the High Court while exercising its powers under Section 482 of CrPC has the greater responsibility of considering the facts and then proceeding for FIR quashing keeping in the mind the interest of justice.

Section 498 – A was brought in by the Indian legislature to help the hapless women who were worst victims of their husbands ire. But, of late, there have been innumerable instances of misuse of Section 498 – A. The situation has become so severe that there are dedicated non-government organizations (NGOs) which solely focus on advocating the repeal of Section 498. Also, there have been numerous instances in India, where the courts have criticised the provisions of Section 498 A, decried its use, and prodded the legislature to have a look at the issue.

Despite all the contradictions that appear in the various judgments of the supreme Court with respect to quashing of criminal proceedings, there are following two cases which are considered string authorities on the subject:

In the case of State of Haryana v. Bhajan Lal 1992 AIR 604, the Supreme Court had laid down following seven categories of cases in which the court can quash criminal proceedings:

In the case of R P Kapur v. State of Punjab 1960 AIR 862, the Supreme Court of India held that criminal proceedings against a person can be quashed if the case being dealt with belongs to any one of the following three classes of cases:

Discharge vs. Quashing Of Complaints In Criminal Prosecutions

In criminal prosecutions, it becomes important to analyze the remedies available with the accused in, especially the option of choosing between filing an application for discharge or approaching the High Court in a Quashing petition.

It is a continuous dilemma prevailing before the legal fraternity and the accused persons, i.e. whether they should approach the trial Court with an application for discharge, or approach the High Court under Section 482 of the Criminal Procedure Code (Cr.P.C.) for quashing of the summoning orders, provided they are of the view that their case has some merits for such relief.

The Hon’ble Supreme Court in the case of Bhushan Kumar & Anr. Vs.State (NCT of Delhi) & Anr. (http://judis.nic.in/supremecourt/imgs1.aspx?filename=39199) has held that:

“It is inherent in Section 251 of the Code that when an accused appears before the trial Court pursuant to summons issued under Section 204 of the Code in a summons trial case, it is the bounden duty of the trial Court to carefully go through the allegations made in the charge sheet or complaint and consider the evidence to come to a conclusion whether or not, commission of any offence is disclosed and

if the answer is in the affirmative, the Magistrate shall explain the substance of the accusation to the accused and ask him whether he pleads guilty otherwise, he is bound to discharge the accused as per Section 239 of the Code.”

Still, divergent views are being taken by various High Courts, directing the affected parties to first approach the trial Courts under Sections 239, 245 of the Cr.P.C. or approach the Session’s Court under its revisional jurisdiction, despite the fact that under Section 397 of the Cr.P.C., the High Court and the Session’s Court have the concurrent jurisdiction. Moreover, there has been a catena of judgments wherein it has been held that an accused can also approach the High Court under its inherent power for quashing of the summoning orders.

The general and consistent law is that the inherent power of the High Court under Sec. 482 of Cr.P.C. for quashing has to be exercised sparingly with circumspection and in the rarest of rare cases.

The Supreme Court in Som Mittal vs Govt. Of Karnataka , has held that the power under Sec. 482 Cr.P.C. must be exercised sparingly, with circumspection and in rarest of rare cases. Exercise of inherent power under Sec. 482 of the Code of Criminal Procedure is not the rule but it is an exception. The exception is applied only when it is brought to the notice of the Court that grave miscarriage of justice would be committed if the trial is allowed to proceed where the accused would be harassed unnecessarily if the trial is allowed to linger when prima facie it appears to Court that the trial would likely to be ended in acquittal.

In the case of Central Bureau of Investigation v. Ravi Shankar Srivastava, the Supreme Court was of the opinion that, the High Court in exercise of its jurisdiction under Sec. 482 of the Code does not function either as a court of appeal or revision, and held and envisaged that three circumstances under which the inherent jurisdiction may be exercised, namely,