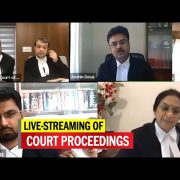 The Gujarat high court on 26 Oct 2020 became the first in the country to start live streaming proceedings on a YouTube channel, with the court of Chief Justice Vikram Nath accessible to the public through a link on the court’s official website.
Chief Justice of India (CJI) S.A. Bobde said on Monday that in practice though, live streaming could be misused as already he was facing several complaints over the virtual hearings taking place over the videoconferencing app Vidyo.

According to an administrative order issued by Justice Nath, the live telecast from Court No. 1 was purely on an experimental basis, and the “aspect of continuing with or adapting the modality of live court proceedings will be decided based on the outcome of this trial”.

The first hearing that was live streamed on 26 Oct 2020, was a plea seeking relief for admission to medical colleges through NEET for students who had not taken the Class 12 exam from Gujarat. The court issued a notice to the state government and reserved its order in the case.

Proceedings of a  Gjarat High Court cases were live on the YouTube link — provided on the HighCourt of Gujarat— for over five hours and about half-a-dozen cases were heard. Around 68,324 viewers watched the channel on the same day.

All high court benches have been functioning through video conferencing since March 24 amid the Covid-19 pandemic, in which advocates, parties, victims and witnesses are made to participate in a video hearing.

In a statement, the high court referred to a Supreme Court judgment which ruled that the public should be allowed to view hearings conducted through video conferencing. The communication referenced a public interest litigation (PIL) filed by Nirma University School of Law student Pruthviraj Sinh Zala that sought the court to issue directions for live streaming to keep with the principles of access to justice. Hearing the PIL, the Supreme Court, on April 6, 2020, issued seven guidelines for web-based hearings and live streaming of court proceedings, saying that the “successful implementation will ensure that the judiciary rises to face the unique challenge presented by the outbreak of Covid-19”.

“In the Model Video Conferencing Rules as prescribed by the e-Committee of the Supreme Court of India, it has been provided that the public will be allowed to view the court hearing conducted through video conferencing,” the Gujarat HC’s chief justice said in his order.

Welcoming the order, Advocate Aaditya Bhatt, a high court lawyer in Ahmedabad, said: “It will usher in a new era of transparency in the judicial system. It will also make the lawyers accountable to their clients.” Advocate Aseem Pandya, former president of Gujarat High Court Advocates Association, said, “This is one of the remarkable and great moments for judiciary in our country.”

The observation followed a suggestion by Attorney General KK Venugopal who suggested that since the Gujarat high court had taken the lead in live streaming the proceedings, the Supreme Court could follow suit.

The bench, also comprising Justices DY Chandrachud and LN Rao, said, “There can be some negative use or abuse of live streaming.” Justice Chandrachud, who heads the e-committee of the SC responsible for enhancing virtual court proceedings, told Venugopal that a delay of 20 seconds occurs between the live streaming and actual proceedings in the Gujarat high court. This ensures a check on anything untoward going live.

For better connectivity, the CJI sought the Centre’s help to enhance the optical fibre network. “In states which do not have fibre optics coverage, we have to rely on satellites,” CJI Bobde said.

We will be updating the list of High Court Advocates Directory as we find more relevant & accurate directories.  If you know any other High Court Directories please connect here